So, I managed to get me a ticket - pretty easily last November in the initial Coach Package sale (9 minutes for the record).

Slow line-up rumours emerged but mainly quashed until the initial listing on 14 April.

Some of the pre-disclosures sounded good (Courtney Barnett and Rae Morris). The Moody Blues were on the bill. I knew that Billy Bragg would be there. Lionel Richie had self-confirmed in the Sunday tea-time slot on the Pyramid Stage.
However, neither of the two pre-announced headliners excited me (I don't "get" the fuss about the "brilliant" Foo Fighters, and I know literally nothing about the no doubt talented but berated Kayne West). 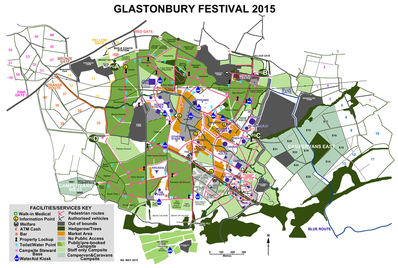 I did notice that although The Who were playing London's Hyde Park on the Glastonbury Friday, but were due in Paris a couple of days later. In truth, I was disappointed about this as the Who 50th Anniversary Tour will (from what I hear) be the last by this iconic band. The gigs at London's O2 venue sold out very quickly and one at the Royal Albert Hall (in aid of the Teenage Cancer Trust) was prohibitively expensive.

Then the rumour mill kicked up a gear, the Sunday headliner was up for grabs.  The claim was that The Who had cancelled two dates in Paris and would be be headlining on Sunday. No confirmations were made initially, but after  a day or two of speculation the Glastonbury organiser's released that they were proud to announce that in their 50th year the iconic The Who would be playing the Pyramid Stage as headliners on Sunday. A broad smile broke out...

One thing that I did think strange (and still do) was discussion on chat rooms saying that if The Who cancelled gigs so close to their due date, it was disloyal to their French fans (maybe) and that if they had cancelled specifically to play Glastonbury, someone BIG must have pulled out.


On June 1st, the full (almost) line-up and stage times were announced.<FULL LINE UP>

Looking at who is there and when they are playing, there is more than enough to keep me entertained.  As I have been before, part of my "plan" is to take things more leisurely, but there are a few clashes as you might expect (1800 acts across 100 stages, and so little time).

I have heard comment that 2015 is not a classic Glastonbury line-up, but would counter that with two things.
To view my Clashfinder selection, ﻿<click here>﻿

I wrote a wee blog about the Foo Fighters unfortunate cancellation.
<Click Here>
17 June 2015
Note regarding the pictures:
I have no idea from where some of the photos on this page have come from, and I am not claiming any ownership (unless I have taken them at events or gigs).
If you would like a credit mentioned, please contact me.